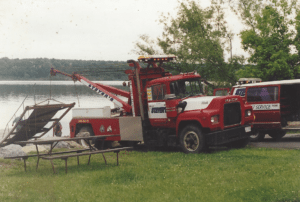 One thing that has always been fascinating about MEDIUM and HEAVY duty towing is the variety of things you can move. As long as it is safe for our drivers, we will move it. For the past few decades, we have always lent a hand in the spring and fall months installing and removing docks around the area. Although this isn’t a wreck or a recovery, the old MACK looked quite majestic in action! 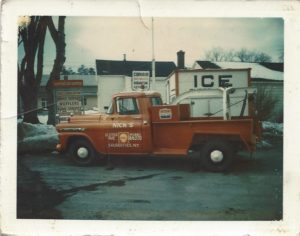 Before STEYER’S became a four generation operation, Nick had a few gas stations in the area. This Polaroid was taken sometime in 1966/1967 when he owned a Shell station on Ulster Avenue in Saugerties, NY. The winch on this 1959 Chevy was customized out of a boom previously used by the US ARMY to move/transport bombs.

Note the “CORVAIR SPECIALIST” on the sign in the background: Nick (original owner/operator) went to school and specialized in Corvair repair as a young adult. Corvair was a Chevrolet (General Motors) product with models released between 1960-1969. 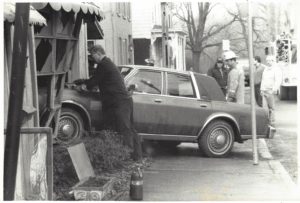 Considering this is Steyer’s first official blog post, we decided to throw it back to sometime in the early 1980’s. This mishap took place at the bottom of Partition Street in Saugerties, NY. It is always a bummer when the road turns and your car doesn’t. After 60 years in business, we sure have a few stories to tell.

Keep checking back to see what else we found in the photo album tucked away on the top shelf.

Scroll back to top